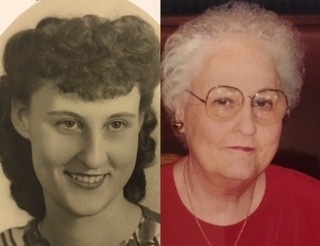 
Owenetta  C Jack (Talbot), 86 of North Salt Lake, returned to her Heavenly Home on February 8, 2018, due to complications of diabetes, at Legacy House Assistant Living Center in Spanish Fork, Utah where she had resided for the last 3 years of her life.  She was born May 11, 1931 in Pocatello, Idaho to Owen Cash Talbot and Rosalie Ann Talbot (Cole) and was raised in Pocatello.
She was blessed to be born into a wonderful family.  Besides her parents, she has an older brother Fernand, and a younger sister Rosalie.  They have always been a very close family and had lots of fun together.  Owenetta and Rosalie were especially close and good friends all of her life.  She also has an older sister, Floral, whom she never knew due to Floral dying from diphtheria, before Owenetta was born.
Owenetta had a wonderful musical talent.  At age 4 she showed an interest in singing and sang several places, including the Orpheum Theater and church functions.  At age 5 she started to play the piano by ear, so her mother began teaching her piano lessons.  She could also name a note on the piano that someone would hit when she was in the other room (perfect pitch).  She composed several little pieces and would play and sing at her brother's violin recitals.  Starting as early as elementary school, she accompanied many musical groups and performed many solos.  At age 12 she was asked to be the Sunday School organist.  In jr high and high school  she played for school chorus', an operetta, and for radio broadcasts.  At age 16 she took organ lessons and at 17 presented a private organ recital.  From that point on, she was one of the organists for any ward she attended.  She accompanied the college choir as well as a group called "The Tunesmiths."  She was playing for Sunday School at Legacy House Assisted Living until a week before she died.  She taught piano lessons from a young age, and did so for years, up into her 70's.

She graduated from Pocatello High School and was 8th from the top in scholastic achievement in a class of 345 students.  She graduated with honors from Idaho State College in June of 1953 with a degree in Music Education.
She worked at Idaho State College as a secretary for the Educational Film Library for 4 years.  At age 26 she and Rosalie moved to SLC to teach school.  She taught at Edison Elementary.
She met Eugene Jack while teaching in SLC, at a stake dance.  He wasn't LDS at the time, and they dated for about a year, and were married on June 6, 1961.  Eugene joined the church soon after and they were sealed in the Idaho Falls Temple on Aug. 27, 1962.
Owenetta had a deep, strong testimony of the gospel of Jesus Christ and was always very active in the Church of Jesus Christ of Latter Day Saints.  She was president of the LDS Institute at Idaho State College.  At age 23 she was called on a stake mission and was blessed to see many good people come into the church.  She has worked in the church auxiliaries as a teacher or in the presidencies.  She served as primary and relief society president, gospel doctrine teacher,  always the ward and choir  organist or chorister, activities director, stake music director, and stake indexing coordinator.

Owenetta and Eugene have 3 kids, Vincent, Janeal, and Theron.  They enjoyed family life and had good times together.  They made it a point to go on one family vacation a year, and enjoyed camping as well as other family activities. When grandkids and great grandkids came along, she enjoyed spending time with each of them.
Later years, Theron was hospitalized due to an unknown cause which left him with severe brain damage, and unable to move, although he can communicate through eye movement.  For 14 years they were by his bedside watching over him and taking care of him, up until Owenetta's death.
She enjoyed genealogy, reading (especially church doctrinal books), watching old movies, and more than anything, spending time with family.  She was able to travel quite a bit throughout her life all over the U.S. as well as other countries.
She was a wonderful mother, grandmother, wife, aunt and sister, and will be greatly missed.
She is survived by her brother, Fernand Talbot, sister, Rosalie Stander, son, Theron Jack, daughter and son-in-law, Janeal and Ken Thurston, 5 grandkids and 3 great grandkids.  She is preceded in death by her parents, Owen and Rosalie Talbot, Sister, Floral Talbot, Husband, Eugene Jack, and Son, Vincent Jack.
Funeral Services will be held Saturday, February 17th at the Orchard 10th Ward building, 3317 South 800 West, Bountiful, Utah.  Viewing will be that day from 9:30-10:30 am, funeral will be at 11:00 am.  Interment will be immediately after at the Bountiful Cemetery, 2224 South 200 West, Bountiful, Utah.

To order memorial trees or send flowers to the family in memory of Owenetta Jack, please visit our flower store.