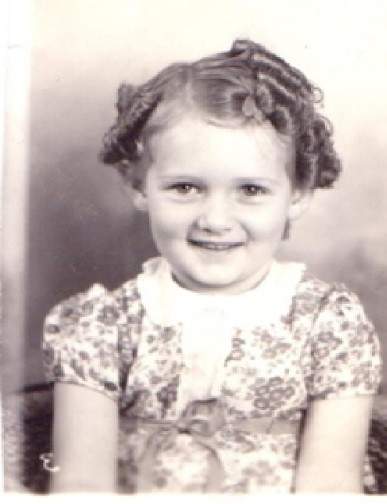 Mildred (LaRae) Miner Nelson, wife of Larry D. Nelson, died Tuesday October 4, 2016 of cancer.
LaRae was born 9 November 1936 in Salt Lake City. She grew up in Long Beach, California. She attended PolyTech High School where she was a member of the Honor Society and excelled in bowling, tennis, shorthand and typing.
Her parents divorced when she was five, but she stayed close to her father. He later married Ernie Noble who had two daughters, Linda and Judy. They had one daughter, Lillie.
LaRae met and married Larry D. Nelson (that quick) in Cedarview, Utah 10 August 1957. Their marriage was later solemnized in the Idaho Falls Temple. She loved her Lord and all the ward members where ever she lived, from Kodiak to Alexandria, Va. She began her married life in Kodiak, Alaska where her husband was stationed with the U.S. Coast Guard. She worked for the Navy as a secretary. She enjoyed the service clubs where she danced and played bingo. She was the top female bowler on the island and become the Admirals favorite score keeper (everyone’s favorite score keeper). She also enjoyed boon docking and ice skating. She enjoyed board games, jigsaw puzzles and playing cards; at canasta she had no peer.
While having three children at home, she attended Utah State University where she was a member of the honor society and graduated with a Bachelor of Science in Business Education. She taught High School in Shoshone and Filer, Idaho. After moving back to Utah she was employed by McKay-Dee Hospital as a pharmaceutical buyer for twenty three years.
LaRae is survived by her husband, her four children, Paul (Kathy), Glen (Kim), Diane (Marshall) Turner, Kara (Brett) Nelson, seventeen grandchildren, five great-grandchildren and one in the oven, her sister Lillie Brown, and her cat Zorro. She was preceded in death by her parents, stepmother, sisters Judy and Linda. Mildred (LaRae) Nelson, wife of Larry D. Nelson, passed away of cancer on October 4, 2016.
Friends may visit with family on Saturday, October 8, 2016 prior to the services from 10:30 to 11:45 a.m. at the Burch Creek Stake Center located at 4955 Adams Ave.
Graveside services for the family will be held at 12 noon at Lindquist's Washington Heights Memorial Park, 4500 Washington Blvd. No flowers please.
Condolences may be sent to the family at:
www.independentfuneralservices.com

To order memorial trees or send flowers to the family in memory of Mildred Nelson, please visit our flower store.