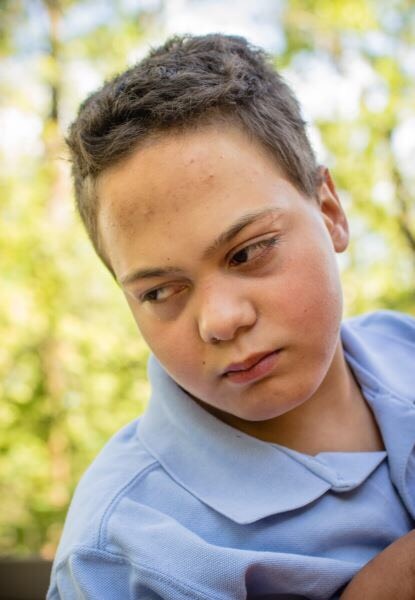 Michael Levi Laird was born August 7, 2001 in Seattle Washington. Born a fighter, he was 10 weeks premature, weighing only 1 lb. 10 oz. He spent his early years moving between Washington, Nevada, and eventually ending up in Missoul, Montana. He had many challenges to deal with in his life to include severe autism, visual impairment, bipolar, and seizure disorder. Being non-verbal, he had a difficult time communicating with others; this was something constantly worked on throughout his life. Eventually he developed a few effective ways of expressing his desires.

When he was 8 years old Michael met the Lairds, who would soon become his eternal family, when he was adopted and sealed to them in the Spokane Washington LDS Temple. Michael instantly took control and turned the Laird household upside down. Everyone took on the role of teacher to help him learn important life skills. Little did they know he would become the real teacher with lessons of unconditional love, compassion, and patience.
Michael loved food, unless it was healthy. He enjoyed showering, swimming, spinning, playing in the dirt, light up toys, tickles, playing the piano, and getting naked (except for when he didn't). He added a load of energy everywhere he went.  It was easy to recognized him by his protective hockey helmet and unique sounds that he made with his mouth. Dad learned to be McGyver, Mom developed her cat like reflexes, Stephan was his playground, Ashna was his best friend, Trestan was his guardian, Tyan the big little brother, and Brillan was the one who let him get away with everything.
He attended elementary and middle school in Missoula, Montana. The family then moved to Stansbury Park, Utah where he entered high school. In March of 2017 he relocated with his family to San Antonio, Texas. Throughout his life Michael had many wonderful and special care givers. In spite of many difficult times, they were also able to experience great joys in Michael's development, his infectious laugh, and tender cuddles. These aids were a tremendous blessing to Michael and the Laird family. There are too many to name, but we are so grateful for all their time and effort in his care. All who came in contact with Michael were impacted by his tender spirit trapped in his disabled body. He would often greet someone with a high five, a sideways glance, adorable giggle, or a grab of the arm to pull them in close. Michael inspired everyone who came in contact with him, and challenged those that would not give in to his demands.
Michael passed away unexpectedly on May 21, 2017 at home in San Antonio, TX. He is survived by his parents, Nick and Adrianna Laird; his siblings Stephan, Ashna, Trestan, Tyan, and Brillan; grandparents Steve and Nina Laird, Dennis Coon, and Arnie and Leola Bass. He was greatly loved by his aunts and uncles: Tina (Bryce) Stevenson, Ashlee (Danny) Main, Trent (Christine) Laird, Shellie Kiper, Memorie (Eric) Dudley, Tyler (Melissa) Coon, Tawnie (David) Hernandez, Cameron (Rachael) Coon, Christopher Slade, Amber (Tyler) Munoz; and 38 cousins.
Funeral Services will be held on Saturday May 27th at 390 Village Blvd in Stansbury Park, Utah. The viewing will be from 10:00 - 10:45am, and the funeral will begin at 11:00am. In lieu of flowers please donate to Primary Children's Hospital in memory of Michael Laird.

To order memorial trees or send flowers to the family in memory of Michael Laird, please visit our flower store.