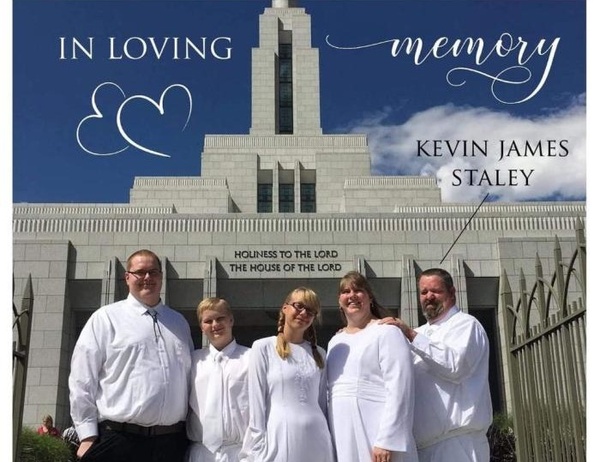 On the evening of Thursday, March 19, 2020, Kevin James Staley passed away peacefully to the other side of the veil from natural causes. He was greeted by his Heavenly Father; as well as his earthly parents - father (James); mother (Betty); mother-in-law (Julie Piep); and brother-in-law (Norman Peip); along with hundreds of other family members and friends - all who will miss his humor, BIG hugs, and contagious laugh.

Kevin entered this life on September 30, 1967, where he spent his childhood, along with his sister (Tammy), in Kearns Utah; attending Kearns High School where he was active in the VICA Club and Wrestling.

At a young age, Kevin enlisted in the US Army. While in Basic Training, he married Gena Bird (later divorced) and had his first son, Joel. During his eight years of service, Kevin achieved the rank of Sargant Class E5 with tours to Panama, Honduras, and Germany then ending his service with an honorable discharge.

Kevin loved hunting and fishing. The wildlife knew they were safe when he was around because he would choose to spend hours watching them in their natural surroundings rather than doing anything to harm them. However, ducks and pheasants were a different story!

In consideration of the restrictive nature of COVID-19, there will be a brief graveside service, Saturday, March 28th, at 1:00 PM with Military Honors at the Smithfield City Cemetery (300 East Center Street, Smithfield Utah). A celebration of life will be scheduled at a later date.

To order memorial trees or send flowers to the family in memory of Kevin Staley, please visit our flower store.