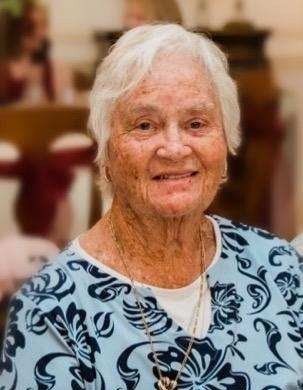 After a joyously blessed life, our beloved mother, Joyce Dott White Jackson, passed away peacefully on January 11, 2020. She was surrounded by her children, grandchildren and great grandchildren in the home her father built for her 70 years ago in 1950.

She was married to our dear father, her sweetheart, Ward Jackson for 52 years. He preceded her in death in 2002. Joyce was the 2nd child of parents M. Kenneth and Ada Marie Sparks White and was welcomed to the world on July 20th, 1931. A rich heritage of family was bestowed upon her. With her older sister Gloria and younger brothers Gary and Kenneth she began her life on the family homestead. As a small child she was secured to a chair while her parents picked flowers on the White family farm. As a little girl, she made friends with a particular cow who was tied up across the street and in later years often commented on her friends, beautiful eyelashes. She especially enjoyed watching her brother Gary ride the tractor and plow the fields. At a young age she began to play the piano in which she became very proficient. Music was an integral part of her life. At 17 she was crowned Queen of the Granite High Dreamland Dance. She maintained many lasting friendships with her high school friends throughout her lifetime.

As a 15 year old girl she was walking down Kenwood St. and caught the attention of Ward Jackson who was working on his mother's roof. They were introduced at the Grandview Ward. Joyce often spoke of this special moment when they first met. While attending high school, Joyce wrote to Ward faithfully for 2 1/2 years as he served in the Paris France mission. She was enrolled as a freshman at the University of Utah when Ward arrived home, at which time she informed her mother that she was getting her social security number and securing a job! She and Ward were married in the Salt Lake Temple on June 22nd, 1950.

Mother was never a stranger to hard work. She had seven children in nine years, including two sets of twins. She ran a household, was a lifelong bookkeeper and eventually opened her own business while completing two degrees from the University of Utah. A Bachelor Degree in Psychology and Social Science. Go Utes!

Joyce was an active member of the church of Jesus Christ of Latter Day Saints and a member of the Daughters of the Utah Pioneers.

She faithfully served in many callings throughout her lifetime including leadership roles requiring empathy and responsibility. Joyce was strong, courageous and loyal and did not cower at opposition. She was a loving daughter. She enjoyed fishing with her father, shopping with her mother, and was a devoted wife and dedicated mother to her own children. One of the best gifts a mother can give, is a childhood filled with great memories. Our mother made this look simple. She was happy, full of life and fun to be with. Grandchildren were drawn to her for her love and support. Never a day went by that Joyce didn't arise and accomplish something of worth. We will miss her dearly.

Special thanks to our devoted sister, Konnie for her dauntless work during our mothers last days.

Friends may call Friday, January, 17th from 10:00-11:45am at the Grandview ward, 2930 South 2000 East SLC, UT. Funeral Services will begin at 12:00 noon. Interment will be at the Wasatch Lawn Cemetery under the direction of Independent Funeral Services.

Mark Bennett is my favorite Son in law

To order memorial trees or send flowers to the family in memory of Joyce Jackson, please visit our flower store.