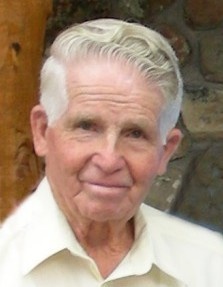 Jay W. Burnett For most of his 92 years he was known as Jay Burnett. He died on Tuesday, September 18, 2018, in South Jordan, Utah, and he will likely be recorded on some death records as Joseph William Burnett.

That was the name of the grandfather for whom Jay was named at birth. Early in life his uncles and aunts began calling him JW to differentiate him from their father. That was shortened to “Jay” and for all of us that is the way we knew him.

Jay was born on March 27, 1926, in Clinton Utah, the son of Arthur Joseph and Clara Ella Child Burnett. His mother died in 1928 before he reached his second birthday. His father married Arlene Atkinson Ashcroft in 1929.

The family relocated from Ogden, Utah, to southern California in 1939. Jay remained in Utah to assist a widowed grandmother with a small Ogden farm. His work ethic was nurtured there and by the time he spent with an uncle on a large dry-land wheat farm in Holbrook, Idaho. In the middle of his sophomore year he joined his family in Bell, California, a suburb of Los Angeles.

He adapted to “life in the city” by achieving academically and as a long distance runner for the Bell High School Eagles. In his senior year, he qualified for the finals of the mile run. It was in June 1944, one week before that race was to be run in the Los Angeles Coliseum, when Jay was drafted into the United States Army Air Corps. He trained as a crew member on a B-17 Flying Fortress and his last assignment was in the Philippines in 1946 just as World War II concluded.

Upon his discharge in November 1946, he returned home to Bell and by the middle of 1947 he had met, courted, and asked Yvonne Durrant for her hand in marriage. Jay also accepted a call to serve as a missionary for The Church of Jesus Christ of Latter-day Saints in the Northern States, which meant he left Yvonne home waiting for her missionary.

The Burnetts retired and moved to West Jordan, Utah, in 1992 after 43 years in the same home in Bell. Those many years in Bell included significant Church service by Jay as a member of four bishoprics, a high councilor, and as a bishop of the Bell Ward.

Jay and Yvonne may have been known and loved best by friends because of their repeated willingness to welcome children and young men and women into their home for short and extended periods of time. They were also sought after to participate in quartets and sing duets at all kinds of Church functions.

Jay’s employment was first in the livestock brokerage business and later in meat packing and distribution. He was involved in softball officiating for more than 50 years, both in California and Utah. His last year of umpiring came when he was in his early eighties.

The Burnetts served a full-time mission in Vancouver Canada, and were ordinance workers in the Jordan River Temple for 16 years.

Interment will be at the Veteran’s Memorial Park at Camp Williams on Redwood Road in Bluffdale, Utah.

To order memorial trees or send flowers to the family in memory of Joseph "Jay" Burnett, please visit our flower store.