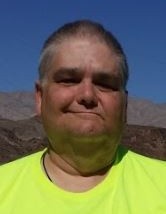 James Richard Blankenship age 57 crossed the threshold into eternity on September 25, 2018 in Taylorsville, Utah. He was born May 13, 1961 in Tulsa, Oklahoma to John Robert Blankenship and Reba May (Burrows) Blankenship. He is the proud father of five children: Cynthia Blankenship, Richard Luke Blankenship, Maryann Mathews, Christine Blankenship, Laura Blankenship and brave step-father of sixteen. He was a faithful member of the Church of Jesus Christ of Latter Day Saints. He will be greatly missed by his wife of six and a half years, Pamela Muir-Blankenship. He was blessed to have 31 grandchildren with one due in December. He is survived by one brother, John Blankenship and two sisters, Elizabeth Ann Blankenship, and Martha Metevelis. He enjoyed teaching Sunday school and working on his computer. There will be a viewing on Monday October 1st from 10:00am to 11:00am followed by a service in the chapel from 11:00 to 12:00 at Granger West 7th Ward building located at 4460 West Cortney Dr. West Valley City, UT. Interment will be at Elysian Burial Gardens in Salt Lake City, UT. Arrangements have been made through Independent Funeral Services.

To order memorial trees or send flowers to the family in memory of James Blankenship, please visit our flower store.