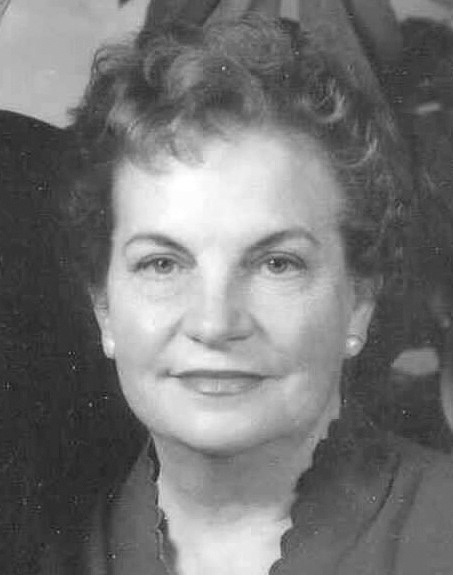 (Click here to listen)
Irene Adams Heywood Jenson June 11, 1925 ~ February 18, 2017 A generous, bright and loving spirit has departed this world. Irene Adams Heywood Jenson passed away February 18, 2017 after a long life, well and fully lived. Irene was born June 11, 1925 in Layton, Utah, the youngest of six children of George Shirley Heywood, and Vina Hilary Adams. She graduated from Davis High School at only 16 and began working at Hill Field U.S. Army Air Base. Her family was close knit, and she was much beloved by her older brothers, Keith, Paul and Reid, and her older sisters, Ruth and Inez. She attended Utah State University, where she was a member of the Kappa Delta Sorority, and her beauty was acknowledged when she was selected Forester Queen. There she met Ross Burke Jenson, who had returned from serving in Europe during World War II and was a Sigma Nu at Utah State. They were married June 15, 1946. They subsequently lived in Layton, Kaysville, Brigham City, Provo and finally Bountiful, Utah. She had five children whom she adored and who adored her. She also took in and mothered many other children as well as adults who needed shelter or help in some way. In addition to humans, she filled her life and her home with animals, including dogs, cats ("a cat for every bed"), rabbits, birds, turtles, lizards, frogs, and pet mice and rats. Any creature her children brought home was guaranteed a luxurious life. She prided herself on being an excellent cook, and her family always had homemade bread and pies. After her children were grown, she became a school lunch cook at Woods Cross High School and often proudly announced, "I cooked 234 pies from scratch today!" She had an open mind and an open heart, and loved to travel, visiting Russia, where her fellow travelers called her "Saint Irina" because she gave away all her money to the poor begging in the streets. She visited the pyramids and traveled down the Nile. While on safari in Kenya, she charmed African tribal elders with her wonderful sense of humor. Her trips to Italy and Europe were so numerous that she lost track of the times she traveled there. She traveled to Greece and the Greek Islands, and she was always excited to visit London and attend theater performances in the West End. She taught her children to be generous and kind and was always upbeat, even though she suffered more than her share of family tragedy and heartache. Her example of compassion, kindness, tolerance and patience lives on in the hearts of her children, her extended family and everyone who knew her. She is predeceased by Burke, her faithful husband of more than 40 years, and her adored sons, Brent and Bruce. She is survived by her son, Lynn, and her daughters, Janet and Angela. She survived her parents, all her siblings, and the losses of her darling daughter-in-law, Peggy Jenson, and her deeply beloved grandson, Dante Cooper. A viewing will be held Friday evening, February 24, 2017 from 6 to 8 p.m. at her ward house at 33 South Moss Hill Drive [1500 East] in Bountiful, Utah. (Drive east on 500 South in Bountiful, turn left onto Davis Boulevard, turn right onto 300 South and follow it to the church.) Funeral services will be held Saturday, February 25, 2017 with a viewing at 12:00 noon and the funeral at 1:00 p.m. Interment will be at the Bountiful City Cemetery immediately following the funeral. An album of photos from her life can be viewed at Youtube under "Irene Adams Heywood Jenson - A Life Beautifully Lived."

To order memorial trees or send flowers to the family in memory of Irene Jenson, please visit our flower store.