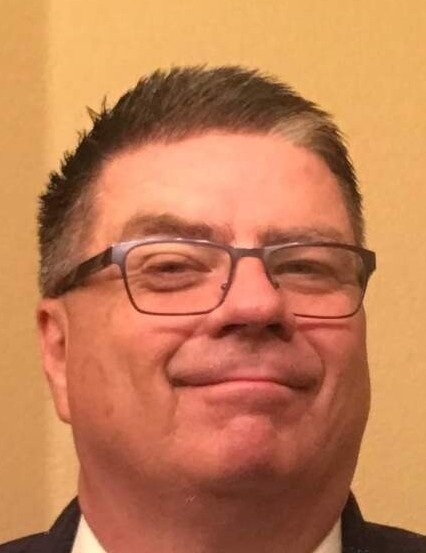 Gregory Scott Lohmeyer age 56 returned home to our Heavenly Father on July 6 th , 2020. He was born on December 5, 1963 in Normal, IL to Richard and Gabbie Lohmeyer.

Greg loved his family. Especially his grandbabies. Greg’s favorite color was blue, which might explain his love for the Dallas Cowboys, Dallas Mavericks and anything BYU related. He was probably one of BYU’s biggest fans. He also loved the movie Pure Country, and George Strait.

Greg loved to cook. His family always looked forward to him making his famous beef stew and banana pudding. He would often start early in the morning preparing food for that night’s dinner. He was always concerned that everyone had enough to eat.

To his family and friends, he was known to be fun loving, adventurous and kindhearted. Recently he was often posting multiple times a day on social media positive and uplifting messages hoping to make a positive impact on someone else’s day. Greg loved to have a good time. He had a cow costume that he had for several years, He wore it to the kids elementry school on Halloween to promote the kids to turn in cream of weber milk lids for the PTA to earn money, he wore the cow costume every oppurtunity he had until the utters wore out. One year he made the Thanksgiving turkey and put a cornish hen inside the cavity of the turkey and told his kids that that the turkey was pregnant.

Greg had a love for teaching primary. He was known to make sure that his class had treats every week. One family in the ward called him the candy man. He also called the kids in his class by their middle names. The gospel was very important to him and although he had many struggles and could have easily given up on attending church he never wanted to miss taking the sacrament and he knew the gospel was truly his anchor.

Greg will be missed by all who knew him. His contagious smile, selflessness and love for others will forever be imprinted in our hearts.

Funeral services will be held July 18th at the Pine Canyon ward building in Tooele.

To order memorial trees or send flowers to the family in memory of Gregory Lohmeyer, please visit our flower store.