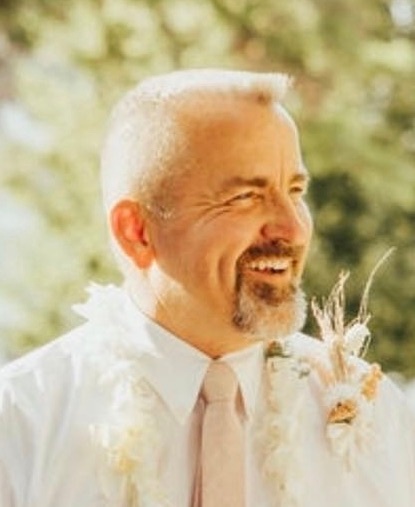 Gordon J Allen was born February 2,1961 to Calvin R and Dixie Jensen Allen. He was the 8th of 11 children. His wonderful parents taught him to work hard and serve often and that became the very fiber of his precious life. He served a faithful mission to Scotland, Edinburgh from 1979-1981. He continued to be a member missionary after that service ended, blessing many lives. After his mission he attended Spartan School of Aeronautics in Oklahoma before making a career choice in construction.  In 1987 he met and married Denise Newbold in the Jordan River Temple. They raised six beautiful children together during their almost 35 years of marriage. He was blessed to see his last three daughters marry in 2021 and to know that three more grandchildren are on the way before the year’s end. We imagine him greeting them in heaven now.

Gordon enjoyed playing basketball and until shortly before the pandemic played in the mornings with a group of friends. He may have been older than some but could hold his own. He enjoyed hiking, camping and fishing. Since he didn’t do that often enough, he would make a fire in the backyard firepit and invite neighbors to join in cooking hotdogs, smores or both.

After Gordon and Denise were married six months, Gordon created his first construction company. Less than three years later, the couple moved from Virginia to Utah and he named his business Precision Installations, later incorporating. In more recent years he also did branding under the DBA of House Surgeon, promising no scars. He was a master of leaving the job with no sign he had been there other than a beautiful new window or door. He did other fine work as well, most recently completing beautiful tilework in his own home.

Gordon was a servant of all. He didn’t care what his current calling in the church was, he would be out helping people. Everyone knew if they needed help, they could call on Gordon. He would be there with his truck and trailer helping people move, setting up or taking down various church events or volunteering for the training program that had impacted him greatly in 2007. He was not flashy in his service, but steady and reliable.

Gordon was also full of fun. He would greet people with a smile and “How does it feel to be beautiful?” He would tell the children “It will feel better when it quits hurting,” if they were ever hurt. “Make it a great day!” was also a common phrase of his. He liked to encourage people to “smile loud!.”

His level of preparation was unmatched. He had backups of his backups with regards to tools, plenty of emergency preparedness and also hosted a gun concealed carry permit class in his home. He was promised that he would have a keen desire to serve and he did. He was blessed to enjoy health and strength throughout his life and be protected from harm and danger, to live to a good age and fulfill his life’s mission in a pleasing and acceptable way. And he did. The Lord’s idea of a good age may not have corresponded with our definition, but he was always protected. His last ride was the culmination of months of preparation as he did motorcycle training, acquired gear, got a motorcycle license and put many hours of experience on the bike. He had wanted to ride motorcycles since he was a teen. He rode the Tail of the Dragon, which is touted as America’s number one motorcycle and sports car road. It has 318 curves in 11 miles. He completed the course without incident, reporting to his wife “Checked that box, safely even.” When asked if he and his buddies were going back the same way, he responded, “No, we’re taking a different road, has a different scenery.” There is no explanation for why he then veered off the road into rocks and was instantly gone, but we have faith that it was his time to go and that he fulfilled what he was sent here to accomplish. He was the Lord’s faithful servant, ever reliable and greatly missed.

A viewing will be held Thursday, May 5 from 6-8 p.m. at the LDS South Jordan Parkway Stake Center located at 9894 S 2700 West in South Jordan, Utah. Funeral services will be Friday, May 6, 2022 at the same location. Viewing will be held beforehand at 10:00 am with services at 11:00 am. Zoom link for the service will be posted on Gordon’s Facebook page.

To order memorial trees or send flowers to the family in memory of Gordon Allen, please visit our flower store.