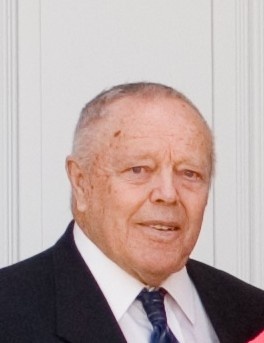 Donald Booth Cleverly passed away peacefully May 5, 2017 at the home of his daughter Chrisee in Tremonton, Utah.
He was born in Bountiful, Utah January 2, 1921 to Jesse Wardle and Minnie Jarriet Booth Cleverly. He lived his life in Bountiful.
He graduated from Davis High 1939, in the days when you had to ride the Bamburger Train to school. Dad graduated from BYU 1948, with a Bachelor’s Degree in Business. He worked for a short time as an accountant at Hill Air Force Base. He then became a small business owner.
Married Verna Laird Naylor Coon on May 11, 1961 she passed away December 5, 2016.
Dad spent most of his early life farming with a team of horses. He grew and sold peaches, watermelon, cantaloupes and all kinds of produce. He was forced to buy a tractor, when the horses ate the neighbor’s crops, and said it was much easier farming after that. Later he owned and operated the Maverick gas station on HWY 89. He had the best pop machine in the whole world at his station because it kept pop so cold.
He served an LDS mission in the Hawaiian Islands from May 1941 to December 1943. He had only been on the island of Oahu a few months prior to the attack on Pearl Harbor. Most of his mission was spent in service and security. He had a deep love and affection for the people he served. Hawaii was always very near and dear to his heart. He thought the Hawaiian language was beautiful and spoke it fluently all his life.
Preceded in death by wife Verna, parents, little brother Gerald, sister Betty Brown, her husband John, and granddaughter Michelle.
Survived by children: Max, Barbara, Debra, Frank, Scott, Chrisee,
25 grandchildren, 52 great-grandchildren, and 2 great-great-grandchildren, 2 nieces Cathy and Cindi, 2 nephews Mike and Buddy.
Funeral Services will be held Monday May 15, 2017 at 1:00 pm at the Orchard Second Ward, 3707 South 800 West Bountiful where friends may call Monday from 12:00 to 12:45. Interment will be at Valley View Memorial Park 4100 South 4400 West. For more information and online condolences please join us at www.independentfunerlaservices.com.

To order memorial trees or send flowers to the family in memory of Donald Cleverly, please visit our flower store.