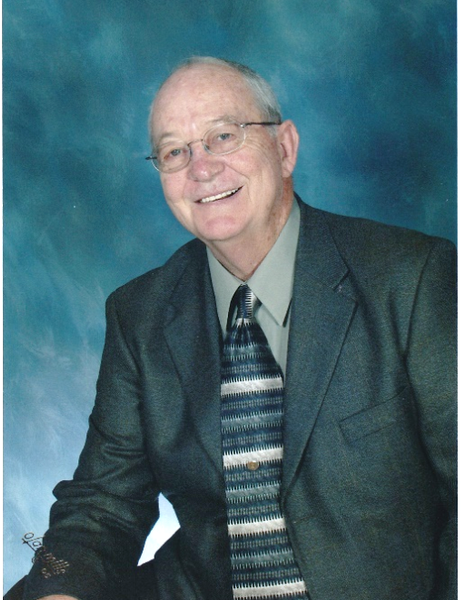 Darell Eddins Hawkins was born of goodly parents on September 25 th , 1931 in Etna, Wyoming.
His father raised him up in the way of life where you work hard and save your money until you can
afford to pay cash for the things you really want and need the most.
He attended rural schools where several grades were taught in the same room because students were
so few in numbers, but the good news was that getting in the band or playing for one of the sport
teams was a cinch. Darell played (at) the trumpet and always seemed to be just the right height to
play any position on the basketball team.
Darell’s father, Lee, was a cheese maker and ran the local creamery where Darell and his only
brother, Spencer were trained to turn truck loads of 5 gallon cans of local farmers milk into cheese.
His philosophy was that anything that came out of the kitchen was “betta with butta” and cheese
goes good with everything!
After high school graduation, Darell married Gay Jackson in 1950. Three children, Lorna
(Petersen), Kevin and Jeff Hawkins were born from this union. Darell worked for Safeway making
cottage cheese and literally enjoyed the fruits of his labors every day for lunch.
In 1959 Gaye and Darell divorced.
Darell met and married Gloria Trujillo and from this union, Michael, Timothy, Terry and Tamara
were born. During these 18 years many memories were made, snowmobiling, swimming and
boating with family on Bear Lake.
During this time Darell began his love for truck driving and anything with wheels that went round
and round. They lived in Provo, Pocatello, Idaho, Farmington, New Mexico and Las Vegas. He
worked for Dicks Trucking, Kuni, and even drove a tour bus out of Las Vegas. This is when he
found out what a “people person” he was and he always talked long enough to find out they were
some distant cousin or at least it felt like it when they parted. His sense of humor and interest in all
things around him made him fun to “waste” a lot of time with. You most always left with a smile.
Gloria and Darell were later divorced.
In the next chapter of his life, Darell landed his dream job driving semi trucks for AMOCO oil. He
took great pride in keeping his truck and trailers clean and on the road. He hauled gasoline, diesel
and crude oil throughout Utah, Wyoming, Idaho and Nevada, making life time friends under the
loading rack, at delivery sites and diners along the way.
In May 1991 he was nominated and inducted into the QUARTER CENTURY CLUB for 25 years
of service and 500,000+ accident free miles with AMOCO. He was presented with a trip to
Indianapolis and pit access at Indianapolis Speedway. Knowing his love for anything with wheels,
we are lucky the race cars were way over his budget and he was forced to use his return flight ticket
back to Salt Lake.
Sometime during those 25 years at AMOCO, Susan Merrill found her dream job in the accounting
department at AMOCO.
She knew he was the one for her when he was able to revive her clunker car and charmed her with
his kindness and love of animals. He could fix anything if he “tinkered” with it long enough!
Susan and Darell were married April 16, 1976 and sealed to each other in the Vernal Temple on
April 19, 2004.
During the 42 years of their marriage, Darell learned to love Country Western Music, The Utah Jazz
basketball games, camping and hunting and fishing on the Green River.
Darell loved the open highway, but found his true passion off the highway in the dirt and majesty of
Moab country when he was introduced to “jeeping” by his oldest son, Kevin. Moab Jeep Safari was
his favorite “holiday” and until the last few years when his health began to fail him, he never missed
a year.
His final trip to Moab was just last year at age 86, to say a final farewell to Del Cathers, a lifetime
trucking friend and rock buddy, on the last day of Del’s life.
Darell passed unexpectedly and peacefully at IMC hospital in Salt Lake of heart failure. He leaves
behind his wife of 42 years, Susan; his children Lorna Petersen, Kevin Hawkins, Timothy (Shari)
Hawkins, Terry Hawkins, and Tamara Powell. His 12 grandchildren, Kasey and Jody; Michelle
and David; Colin and Taylor; Haylee and Taylor, Randi; Michael,Rachael,and Whitney Powell; a
niece and nephews.
He also leaves lifelong friends and neighbors that made his life rich with kindness and fond
memories:
Thank you, Larry, Veryl, Swede, Terry, Richard, Serge and Val for your influence and precious time
shared caring for us; making memories biking, snowmobiling and jeeping.
We know Darell was greeted in heaven by his loving parents, James Leland and Arvella; his
brother, Spencer and wife Jean and his sons, Michael and Jeff as well as many loving companions,
especially Gizmo and Cindy.
You are already sorely missed…we love you and will “catch ya later”.

To order memorial trees or send flowers to the family in memory of Darell Hawkins, please visit our flower store.