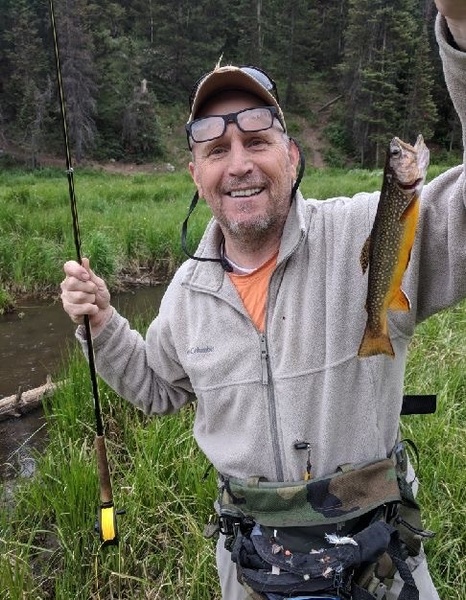 On Sunday, May 31, 2020, Corey David Haycock, passed away surrounded by his family on the shores of Lake Powell on his 63rd birthday. He spent the morning enjoying the lake and loving his grandchildren. Then he laid down to enjoy an icy cold Coke in the shade. But Corey didn’t finish that Coke, as he was suddenly and unexpectedly called home.

He served a mission in Oslo, Norway and attended the University of Utah. He worked in electronics for 39 years. On September 3, 1980, he married Elizabeth Menlove in the Salt Lake Temple for time and all eternity. They raised one daughter Alta and four sons; Jordan, Parker, Winston, and Samuel.

Corey’s time was spent with his wife, children and grandchildren. Whether hiking in a slot canyon, fishing the Uintas, skiing, biking, or boating, he enjoyed the outdoors with his family.

Corey was the “go to” person for his children. He was the first call in an emergency or a home project. Corey was a perfectionist and insisted on exactness in all his creations.  He was passionate about his beef, from prime rib Fridays to brisket Sundays.

Corey, known by his grandchildren as Pop, left this world too early. He is sorely grieved by his family and especially his grandchildren. He had a special connection with his grandkids who adored him. They knew Pop could fix anything. He spent innumerable hours reading with them and was known for frequently telling them they were the best boy (or girl) in the world.  He vigorously supported every soccer game, dance or musical recital that came his way. Corey was dedicated to Liz. He often referred to himself as “her assistant” and even joined the ward choir while she was director.

As a disciple of Christ, he lived the Gospel and engaged with both his hands and heart. He loved working with the youth and made campouts thrilling with pyrotechnics, speakers and his creativity. Also, he served as the stake IT guy for many years, working behind the scenes and ensuring that communications went smoothly.

Corey has a fun personality with a quick, rapier wit that sometimes caught people off guard. People who knew and loved him joked that “If he doesn’t offend you he doesn’t like you.” As the years passed, Corey’s sharpness softened but his sense of humor remained.

Corey’s sense of humor was on full display when as a technology specialist, he had fun explaining a “dongle” to technology-challenged women folk. He was also known to exclaim “Do as I say, not as I do,” with a mischievous glint in his eye. Other phrases he often repeated were

“I resemble that comment,” “I’ll be dancing on your grave,” and “I’m 60 and still kicking.” And he kicked it till the very end.

A graveside service will be held for family members at 10 am Saturday, June 6th, at Larkin Sunset Lawns, 1950 E Dimple Dell Road (10600 S), Sandy, Utah. Please bring a lawn chair if you wish to sit during the service.

Family and friends are invited to gather after the service at Granite Park (2725 Grouse Creek Circle, Sandy) from 11am - 2pm.  Lunch will be served.

Park entrance is on the left.

To order memorial trees or send flowers to the family in memory of Corey Haycock, please visit our flower store.

Gathering of Family and Friends