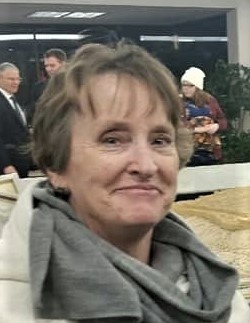 Carolyn Jones Schwab, 63, a resident of West Jordan, Utah, passed away at home on December 10, 2019 surrounded by her family. She was born on February 16, 1956 in Delta, Utah to Rulon and Ruth Jones. Carolyn was the third of four children; her siblings are Wayne, Tammy, and Garth. She loved growing up in the country and spending time with her family.

She graduated from Delta High School in 1974 and received a degree in Meteorology from Rick’s College. She lived in Salt Lake City and worked at Utah Woolen Mills. She was very proud to follow in her mother and father’s footsteps and serve an LDS mission. Carolyn served in the Nashville Tennessee Mission. For a period of time, she was one of the few sister zone leaders. After returning from her mission, Carolyn moved to Salt Lake City where she met John Schwab in the Avenues singles ward. They were married on July 13th 1979 in the Salt Lake Temple. They were married for over 40 years. They had four loving children, Carl, Stephanie, Richard, and Lisa.

She was a devoted homemaker who often volunteered at her children’s school and become the PTA president. She always had a garden in her backyard and loved to bottle the fruit and vegetables. She loved to read and became actively involved in a book club in the past few years. She loved her visiting teaching assignments and having lunch with them. She treasured spending time with her family and holidays were always spent with the extended family together. She loved the vacations she took with her family. Carolyn and her husband were able to travel in the United States, Switzerland, Germany, and the Caribbean.

Carolyn is survived by her husband John, her children Carl (VidaLee), Stephanie (Nathan), Richard (Jessica), and Lisa (David), and her sister Tammy (DeLynn). She was blessed with 10 grandchildren, (Chase, Kaylee, Alice, Amelia, Benjamin, Elizabeth, Nevaeh, Angelina, RJ, and Ashton). Carolyn was preceded in death by her father Rulon, her mother Ruth, her brothers Wayne and Garth, and her granddaughter Alice.

To order memorial trees or send flowers to the family in memory of Carolyn Schwab, please visit our flower store.