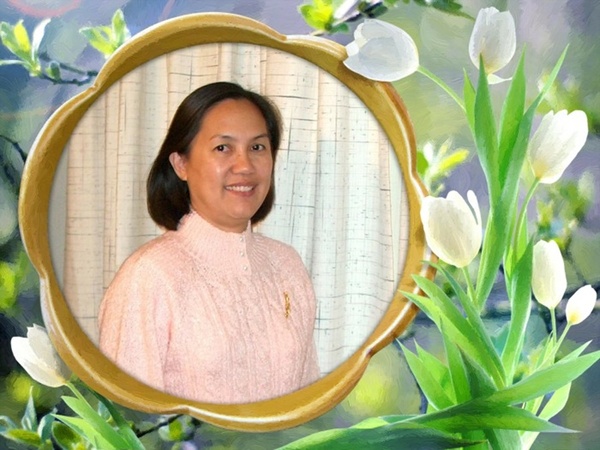 
A day before Pioneers' Day which is the 23rd day of July 2019, Angeles Castel Lancaster, a caring and loving sister passed away at the age of 66. Angeles, or Angie as most friends and acquaintances call her, was born on August 20, 1952 in the City of Bacolod, in Negros, an island located in the middle part of the Philippines. She is the 2nd child and daughter of the late Rafael del los Reyes Castel and the late Josefina Abadiano Castel. Bing, as her family fondly called her is a very artistic, creative and talented lady. Angie or Bing is survived by 4 other siblings namely: Evelyn, Elsie, Rafael Emmanuel and Delmar.

Having been brought up in a home where education was given utmost importance, Angie therefore endeavored to earn a Bachelor's Degree from the University of St. La Salle in Bacolod City and having a major in Management, she later became the first Personnel Officer in the City Government of Bacolod and during her stint as personnel officer, she was the first employee to successfully come up with the first Position Classification and Pay Plan for the City Government of Bacolod. Her search and yearning for further studies brought her footsteps to Brigham Young University-Hawaii Campus. It was there that she had honed her skills even more especially in the arts. As she moved to the mainland, she didn't stop studying more, this time in the field of accounting and she was later acknowledged as a Certified Bookkeeper by the American Institute of Professional Bookkeepers. She has been such a conscientious and meticulous worker wherever her profession brings her. The family had come up with the decision to have a funeral service for her which will be held at the chapel of the Temple View Branch which is at 1966 S 200 E, Salt Lake City on the 3rd day of August, 2019 at 10 o'clock am.

To order memorial trees or send flowers to the family in memory of Angeles Lancaster, please visit our flower store.