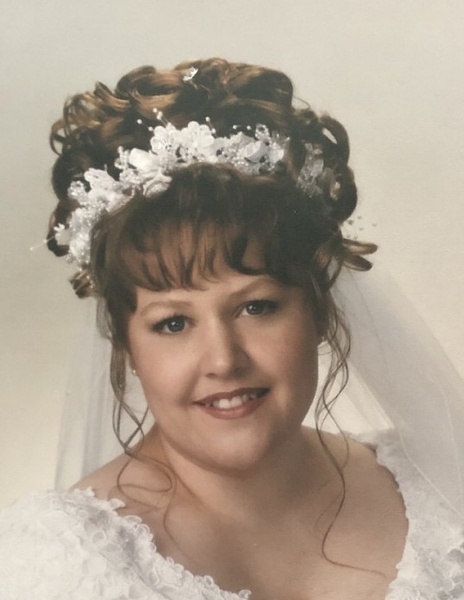 Angela Lynn (Dalley) Allen - May 17th, 1974 - June 13th, 2019 - Orem, Utah.  My beautiful bride passed away peacefully in the early morning hours of June 13th from heart failure as a result of advanced stage Endometrial cancer.  Angela is survived by her heartbroken husband Brett, son Raul, daughters Ellie and Jackie. Angie is also survived by her Mother, Gayla Knapp, Brothers Brandon (Terran) and Jason, Parents-in-law Bruce and ShanonAllen who were happy to finally have a daughter in the family! Brothers-in-law Todd (Shannon), Bryce (Jody) her Father John (Penny). Nieces Brooklyn, Savannah, Taylor, Addison and Willow. Nephews Landon, Dayton, Colton and Miles.  Angie was preceded in death by her baby sister Rebecca Lynn and many uncles, aunts and all of her Grandparents.  Angie spent most of her childhood in Riverton and Sandy Utah.   Angie graduated from Alta High School, Ricks College and attended Utah State University where she studied child development and early childhood education before choosing to serve a mission; Angie served in the Indiana, Indianapolis Mission. When Angie completed her mission she met some very special friends; Ryan and Heidi Wilson who would eventually introduce her to me on a blind double date during Thanksgiving break.  It was love at first sight and before long I was moving home from school to be closer to her.  We were married in the Salt Lake Temple on August 6th, 1998. Angie faithfully served callings in Primary and Gospel Doctrine but her true love was teaching the sisters in Relief Society.  We would often be waiting for what seemed like forever after church got out before Angie would be done discussing her lessons with the ladies. Angie and I spent our early marriage moving from Utah to Florida, California, Colorado and finally back to Utah.

Angie wanted nothing more than to be a mother and after countless years of fertility treatment we were blessed to adopt our sweet kiddos and for Angie, after 8 years of marriage, her dream of motherhood had finally come true.  We were sealed all together as an eternal family on June 27th, 2008 in the Salt Lake Temple. Angie enjoyed volunteering in the classrooms of our kiddos and would often be found in her scrapbook room making things for their classroom activities.  Angie was a fierce protector of her children and would go to the ends of the earth to make sure they were happy, healthy and safe! Angie had a deep love for music, and an ability to memorize lyrics, she passed this love onto her children and could often be found with a diet coke, car windows down and singing at the top of her lungs as she drove.  Her cell phone was full of cherished videos of her duets with her kids!  Angie was proud to have our son serve a mission in the Philippines Cabanatuan Mission and loved re-living her own mission memories through his letters and later phone calls each week.

Our world was turned upside down on November 28th, 2017 when we heard the dreaded news that Angie had cancer.  Angie immediately looked at me and told me it would be ok, a strength that she continued to show throughout this entire journey.  Angie began chemo treatments on December 6th under the loving care of Dr. Steven Wallentine,.  She experienced a short remission before the cancer returned once again only this time with a vengeance.  Angie decided to enroll in a trial program at Huntsman Cancer Institute with Dr. Theresa Werner who showed great love and concern for Angie, while undergoing the trial treatment, Angie selflessly volunteered to have tumor and lab samples taken regularly to be studied as part of the search for a cure.  She often said that it may not help her now, but if she could help ensure her own daughters or others would have  a chance of beating this cancer in the future, then she would be more than happy to help. These last few months as Angie was fighting a second recurrence, she was blessed to be back under the care of Dr. Wallentineand also had a wonderful experience working with Dr. Gary Garner and his staff who provided amazing palliative care.  I would also like to thank Dr. Jessica Hunn who was Angie’s Surgical Oncologist who worked tirelessly to ensure every tumor possible was removed so chemo had the best chance of working. Angie had a favorite necklace that she wore during treatments that had the words “I am the Storm” on it.  Sweetie, you are now free from the storm, you fought the battle and now it is time to enjoy the calm after the storm! I'm not sure how to continue on without you, but I know you will be guiding me from the other side - Until we meet again my sweet Ang - love you for eternity.

To order memorial trees or send flowers to the family in memory of Angela Allen, please visit our flower store.